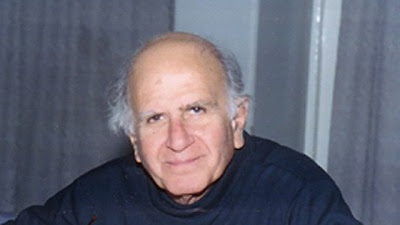 In his lecture last night at St. Elizabeth of Hungary Church, the Jesuit theologian Henri Boulad, who is also a Melkite Catholic working in Egypt, spoke about Theosis (Divinization). He reminded his audience of St. Peter's Second Letter "by which [Christ] has granted to us his precious and very great promises, that through these you may escape from the corruption that is in the world because of passion, and become partakers of the divine nature." (2 Peter 1; 4).  While the Christian West emphasized the Cross, the Christian East emphasized the Resurrection, Henri Boulad said. In the Byzantine hymn of the Resurrection of Christ, the Church sings "Christ has risen from the dead, and by his death he has crushed death, and has given life to those who are in the tombs." Near the end of the Creed which is recited every Sunday in Mass in both East and West, we find the words "We await the resurrection of the dead and the life of the world to come." As much as carrying the cross with Christ is fundamental to our redemption, the resurrection with Christ is the purpose of our lives. Man is created for a purpose and that is to live eternally in a state of joy which can only be found in union with God our father who loves us. The pessimistic view about Original Sin and sinfulness was the result of St. Augustine's theology in the 5th century. While the Catholic Church always maintained and believes in the intrinsic goodness of all men, the 16th century Reformation took the pessimistic view of Augustine to excess such that the Protestant Reformers thought that humanity was fully corrupted after the Fall. The need of humanity is not only redemption from sin but more fully the sanctification of man, nature and the cosmos to attain the "Omega Point": Theosis in Christ reflected in the thought of the Jesuit paleontologist Teilhard de Chardin in the 20th century.  Theosis is the basis of Christian Hope. In the 2nd century St. Irenaeus declared that "The glory of God is Man." In St. Athanasius, the great Alexandrian Father in the 4th century, "God became man so that man may become God." This was also the basis of the work of such Biblical Scholars as Origen in the 3rd century, and St. Cyril of Alexandria in the 5th century. We find the same in St. Thomas Aquinas, the Angelic Doctor of the 13th century. It is only with modernity ushering a physical outlook that materialism creeps in. The philosophical consequences of separating metaphysics or beyond-physics from matter contributed to the crisis of the Enlightenment and that of Modernism in the 19th and 20th century. It is no wonder then that atheism is prevalent in the West.

In the shadow of mosques and secularized societies, how can Christians like you and me continue to witness to Christ. We are happy that we are given this gift in this 21st century. If Islam  is the religion of God, Christianity is the religion of Man. God knelt before man in the Last Supper. Christ invites you and me to reach out to everyone in love. When the young man asked Christ about inheriting the kingdom of God, Christ responded to him with a question: Have you learned the Commandments? The young man replied: All this I did since my early age. Now Christ surprised him: Go sell what you have and follow me. Can you sell what you have? Can you really give time to Christ in your life? But where is Christ? And surprisingly he is in everyone in need. Can you do a bit of this in love everyday? Can you help Him who is in the Other? He answers the elect "Come, O blessed of my Father, inherit the kingdom prepared for you from the foundation of the world; for I was hungry and you gave me food, I was thirsty and you gave me drink, I was a stranger and you welcomed me, I was naked and you clothed me, I was sick and you visited me, I was in prison and you came to me." (Matt 25: 34-36).

But here is another real story: Marco was a teenager at the Jesuit School. He was aggressive with his classmates pulling their ears and knocking them on the head. I received many complaints from students and parents about him. I spoke to Marco and noticed that he cried when blamed, so I told him first that he is God's unique boy. No one can touch him because his Daddy in him (God) is sacred. I urged him to find the good thing that he can contribute to others and to be open. The enthusiasm that Marco received changed him. And Marco became very successful with everyone. His marks exceeded his dreams. In fact enthusiasm means "God Within." The Church - the entire Church - must learn how to encourage those young ones: not by putting them down or telling them how sinful they are, but by showing them that God is indeed in them. This is the teaching of Jesus when he said "The kingdom is within you." This is also the teaching of the Church. The Spirit of God is in every human person. Respect that person and appreciate the gifts given to him by God. This is for parents, bosses, workers, young and old, of every race, culture and religion. Then you can start your way into Theosis. Thank God for the incarnation of his Son through whom we became adopted sons of God.
Posted by Today's Questions at 9:13 PM