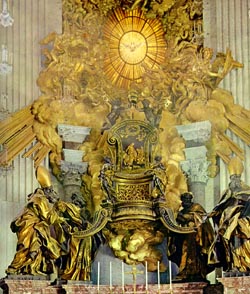 I have been reading "Catholicism" a volume written by the great Jesuit theologian Henri de Lubac in 1937 well before the reforms of Vatican II to which Henri de Lubac contributed substantially. In his "Catholicism", de Lubac retrieves the meaning of the Body of Christ as interpreted by the Fathers of the Church and the great medieval scholars including St. Thomas Aquinas. While Pope Pius XII interpreted the mystical body of Christ to be the institution of the Catholic Church, the Fathers believed it referred to the Eucharist, the most important sacrament of communion for the life of Christians. This is only the beginning on which de Lubac builds his "New Theology" where the "Supernatural" is not separate from "Nature." In Henri de Lubac, "Human nature [the Church] tells us at the outset, is certainly sick, infirm, but it is not totally depraved...The divine likeness in it may be dimmed, veiled, disfigured, but it is always there." (Henri de Lubac, Catholicism, Chapter IX, Page 145).  On the non-Christian religions including the Gentiles de Lubac expounds the universality of the Catholic Church not only geographically but also theologically:  "Ever since the day when, full of the strength and the promises of the Holy Spirit, the Church issued from the Cenacle to overrun the earth, she has encountered everywhere in her progress countries that are already, in the religious sense, occupied... Must everything be jettisoned to give place to the Gospel?...False religions, therefore, are religions that stray from the truth to become engulfed in error, rather than religions whose whole direction is misleading and whose principles are wholly false. They are based on childish ideas more often than evil ones."

Let's look anew at the New Theology ushered by Henri de Lubac. His efforts at retrieving the early Biblical scholarship of Origen, the Fathers and the Scholastics have three important dimensions in the continuing development of understanding in the Catholic Church:

First: God works in every created human person. The Holy Spirit is not bound by any particular theology for "the gift of the Holy Spirit had been poured out even on the Gentiles" (Acts 10: 45). If the Spirit leads persons and communities such as Cornelius to Peter before their baptism, then the Church proposes to all non-Christians that salvation is always possible to those who, following the dictates of their conscience, search for God. It is with this in mind that, from the beginning, the Church married the good elements she found in the Greek philosophies with what she believes is revealed Hebrew tradition.While she started with Peter, Paul and the other disciples as a little Jewish group of followers of Christ, she continued to preach the good news to non Jews too, always in the hope that they will find salvation through Jesus Christ the only way to heaven. On this basis too, the grace that the Holy Spirit bestows on persons and communities includes many Pagans that the Spirit prepared for Christ's coming. The Magi may saw his light in their own cultures and therefore came to Bethlehem to pay homage to the Saviour of all. The preparation for Christ's coming could also be understood as the preparation for the Second Coming of Christ in which the New Jerusalem or the Kingdom of God reaches out to the world at the end of time.

Second: The Church, according to Vatican II, is not only the Mystical Body of Christ, but also the People of God from the earliest monotheist faith of Abraham to the end of the ages and in the cultures which receive Christ. Let me add that according to the CDF declaration Dominus Iesus or "The Lord Jesus" approved for publication by Blessed John Paul II in 2000, the following is stated:
"Above all else, it must be firmly believed that 'the Church, a pilgrim now on earth, is necessary for salvation: the one Christ is the mediator and the way of salvation; he is present to us in his body which is the Church. He himself explicitly asserted the necessity of faith and baptism (cf. Mk 16:16;Jn 3:5), and thereby affirmed at the same time the necessity of the Church which men enter through baptism as through a door'.77 This doctrine must not be set against the universal salvific will of God (cf. 1 Tim 2:4); “it is necessary to keep these two truths together, namely, the real possibility of salvation in Christ for all mankind and the necessity of the Church for this salvation”. The Church is the “universal sacrament of salvation”, since, united always in a mysterious way to the Saviour Jesus Christ, her Head, and subordinated to him, she has, in God's plan, an indispensable relationship with the salvation of every human being. For those who are not formally and visibly members of the Church, 'salvation in Christ is accessible by virtue of a grace which, while having a mysterious relationship to the Church, does not make them formally part of the Church, but enlightens them in a way which is accommodated to their spiritual and material situation. This grace comes from Christ; it is the result of his sacrifice and is communicated by the Holy Spirit'; it has a relationship with the Church, which 'according to the plan of the Father, has her origin in the mission of the Son and the Holy Spirit'.
21.  With respect to the way in which the salvific grace of God — which is always given by means of Christ in the Spirit and has a mysterious relationship to the Church — comes to individual non-Christians, the Second Vatican Council limited itself to the statement that God bestows it 'in ways known to himself'.  Theologians are seeking to understand this question more fully.  Their work is to be encouraged, since it is certainly useful for understanding better God's salvific plan and the ways in which it is accomplished. However, from what has been stated above about the mediation of Jesus Christ and the 'unique and special relationship84 which the Church has with the kingdom of God among men — which in substance is the universal kingdom of Christ the Saviour — it is clear that it would be contrary to the faith to consider the Church as one way of salvation alongside those constituted by the other religions, seen as complementary to the Church or substantially equivalent to her, even if these are said to be converging with the Church toward the eschatological kingdom of God." The Declaration continues:"Certainly, the various religious traditions contain and offer religious elements which come from God, and which are part of what “the Spirit brings about in human hearts and in the history of peoples, in cultures, and religions”. Indeed, some prayers and rituals of the other religions may assume a role of preparation for the Gospel, in that they are occasions or pedagogical helps in which the human heart is prompted to be open to the action of God. One cannot attribute to these, however, a divine origin or an ex opere operato salvific efficacy, which is proper to the Christian sacraments.88 Furthermore, it cannot be overlooked that other rituals, insofar as they depend on superstitions or other errors (cf. 1 Cor 10:20-21), constitute an obstacle to salvation.
22.  With the coming of the Saviour Jesus Christ, God has willed that the Church founded by him be the instrument for the salvation of all humanity (cf. Acts 17:30-31). This truth of faith does not lessen the sincere respect which the Church has for the religions of the world, but at the same time, it rules out, in a radical way, that mentality of indifferentism “characterized by a religious relativism which leads to the belief that ‘one religion is as good as another'”. I have removed the notes for easier reading but you may wish to look again at this rich document. See http://www.vatican.va/roman_curia/congregations/cfaith/documents/rc_con_cfaith_doc_20000806_dominus-iesus_en.html.

Third: Henri de Lubac's work is at the same time a reminder to all of Christian Humanism which developed in Western Christian culture starting in the 12th century with the retrieval of the Roman and Greek Classics. It is an expression of the beauty of creation as we find in the paintings of Michael Angelo and Rafael, the polyphonic music and chants of Palestrina and Bach, and the architecture of St. Peter's in Rome as well as Notre Dame in Paris.  We may recall here the enormous work of Blessed John Henry Newman on the development of doctrine, and before him the humanist work of St. Thomas More in his "Utopia" of the 16th century. In fact we could go back to St. Francis of Assisi  in the 12th century, probably the first Christian Humanist in the West. While we are at it, let's recall to memory yje work of St. Basil the Great, Archbishop of Constantinople in the 4th century who built a city with hospitals to serve the poor.

When we think of Christian unity which is a dear goal for all committed Christians, let's recall to  mind that the doctrinal and liturgical developments in the entire Catholic Church remain a treasure to hold.

For many reasons, historical and theological, I remain convinced that every human person who seriously searches for the truth is, according to Dominus Iesus, in a mysterious way, linked to the Mystery of the Church i.e. The Catholic Church. That is how open and far-reaching is Catholicism. Henri de Lubac certainly contributed to such openness.